Bronzeville, Little Tokyo – A Threshold in Time and Place 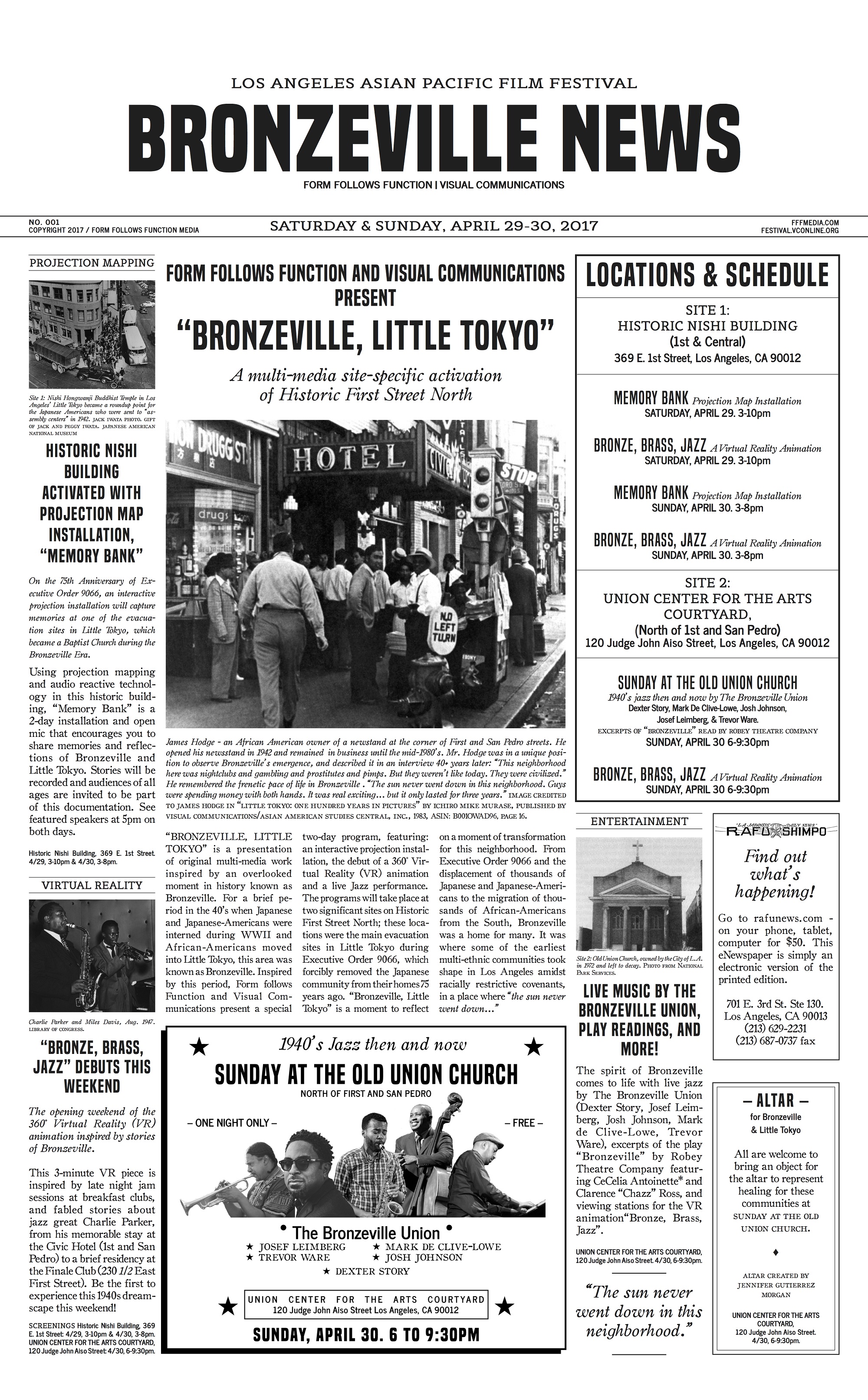 Executive Order 9066, the nation-wide deportation of people of Japanese ancestry during WWII resulted in 30,000 people losing their homes and businesses in Little Tokyo in 1942. Bronzeville, a name for towns across the country where African-Americans filled the war defense industry’s labor shortage while migrating from the South resulted in 80,000 African-Americans and Latinos living in Little Tokyo by 1943. These few powerfully dynamic years in the 40’s have been calling to be remembered now more than ever. With racism, displacement, and deportation ever-present, as people of color, it is crucial that our shared histories and places are recognized as roots, a lifeline and legacy.

We first learned about Bronzeville in 2012 during our production of “Union”, a documentary about the story of Union Church and how it became Union Center for the Arts. Tad Kowta, son of Union Church Pastor, described an over-crowded neighborhood when they returned from internment and that Union Church became a Social Services center called “Pilgrim House”. Tad’s father was part of re-establishing Union Church upon their return and his few words about it always made me wonder how that transition occurred and how these communities responded to each other during the changing of hands, names, and places. What structures are still standing from Bronzeville and how far did it span? Where were these Breakfast Clubs where early morning jam sessions took place and working class people had a good time? Where were the cornerstones of community when these two historic moments came together in such turbulent times?

We soon learned about Project Bronzeville, a multi-disciplinary exhibition in 2013 curated by Artist, Kathie Foley-Meyer. Upon speaking with Kathie we knew there was a collaboration ahead in Little Tokyo. When the opportunity came for FfF Interactive II*, she joined as us as Project Advisor and Bronzeville, Little Tokyo began to take shape with the support of her research and of many others before her. It is the pulse of a once bustling Bronzeville that inspires collaboration and creativity to shine in order to piece together its little-known history. For this reason we invited a talented array of diverse artists of varied mediums to join us in creating original works that highlight the threshold and vibrancy that was Bronzeville, Little Tokyo. Beginning with a projection map installation, VR animation, and a live Jazz performance, it grew to include a theatrical play reading, an altar installation, and a historical walking tour. That said, the Bronzeville story knows it deserves to shine and be known.

We are incredibly grateful for the opportunity to partner with Visual Communications, Project Bronzeville and such talented people and dedicated groups in collaboration. With so many experiences, disciplines, and discoveries at work, we decided to ask a few of our collaborators some questions about their process and perspectives.

Dexter Story, a multi-instrumentalist, composer, arranger, songwriter, producer, and music director, is responsible for the original 40’s inspired theme music featured in the virtual reality animation, Bronze, Brass, Jazz. He also brings together a star-studded quintet under the name Bronzeville Union to perform together for the first time at Sunday at the Old Union Church on April 30th at Union Center for the Arts. 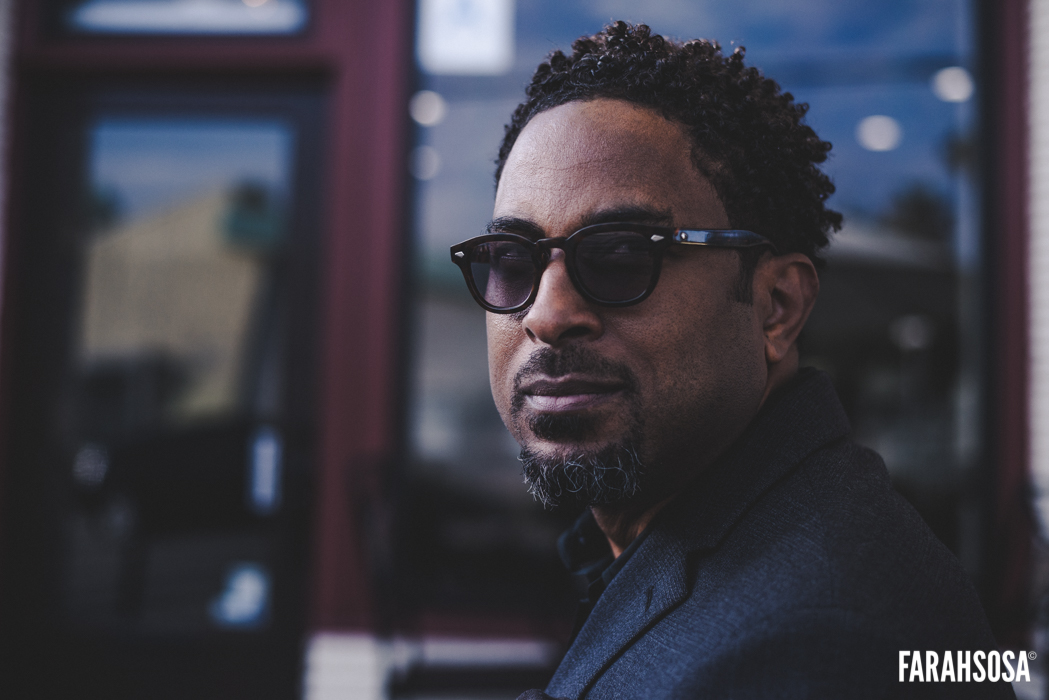 JQ: Why do you think your medium and this platform is important in highlighting such history?
DS: People are entitled to make up their own minds about the history but this project gives the public a number of media perspectives with which to come to some sort of understanding about this unique moment in L.A. history. I admire the creativity around telling the story of Bronzeville, Little Tokyo.

JQ: What was it about the subject matter that drew you most into doing this project?
DS: That it speaks to the immigrant issues that are so pronounced in our world culture today and celebrates the music surrounding the period.

JQ: What would be the most important thing you would want the audience to take away from experiencing “Bronzeville, Little Tokyo?”
DS: That L.A. has profound cultural cache worthy of extensive academic research and wide-reaching public awareness. 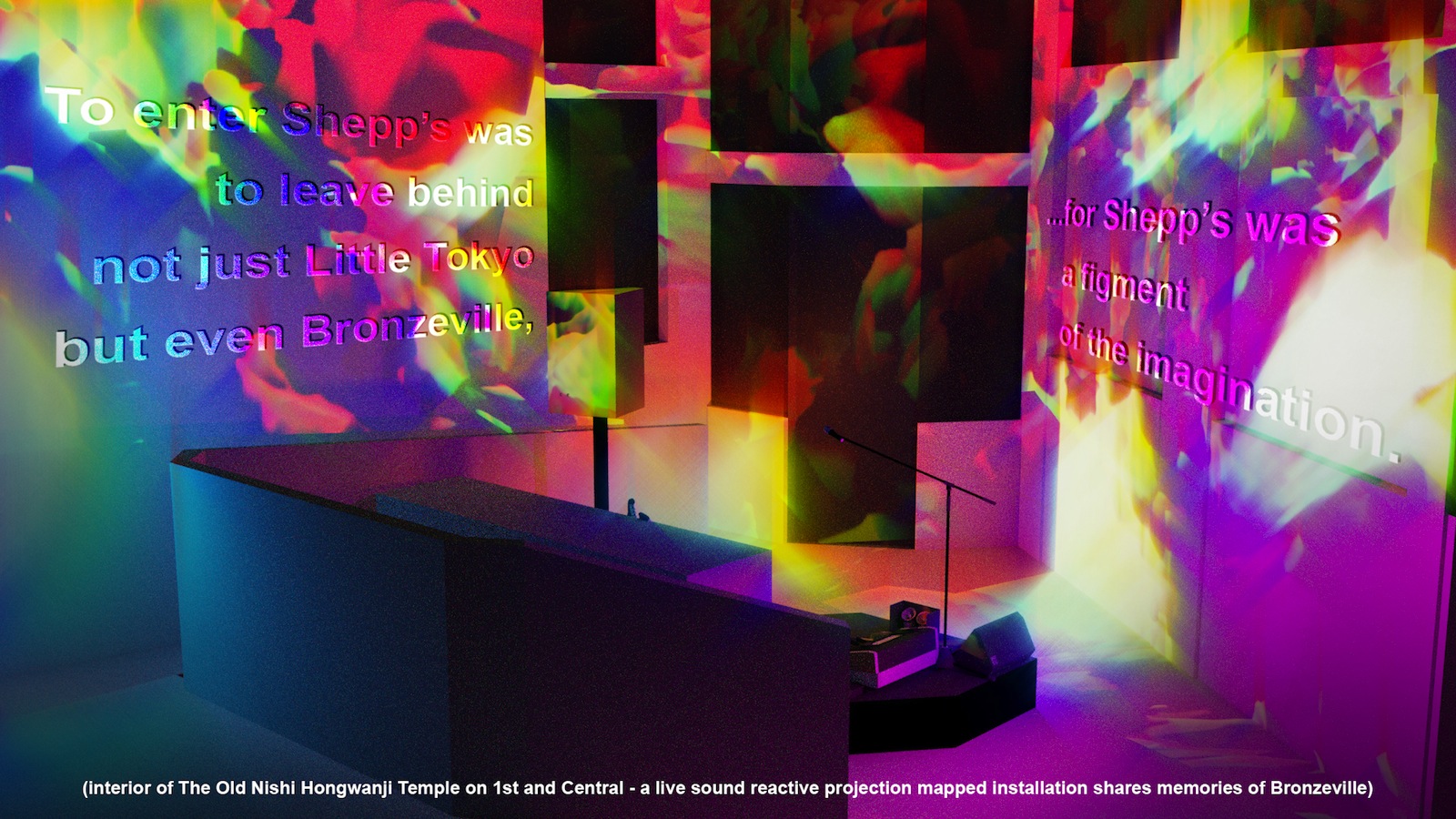 Eddy Vajarakitipongse, Technical Director, Experiential Designer, and Audiovisual Installation Artist joins FfF Interactive* for a second year with Memory Bank, an audio reactive projection map installation & open mic. Activated with live memories and stories about Little Tokyo and Bronzeville, this 2-day installation is an interactive storytelling space that will be documented in 360 on April 29th & 30th at the Historic Nishi Building of JANM.

JQ: Why do you think your medium and this platform is important in highlighting such history?
EV: My preferred methods for communicating through art have always involved the wondrous interplay of light and sound. Research and conscious content are the backbone and road map.

JQ: What about the subject matter that drew you most into doing this project?
EV: How Bronzeville came to be, the fact that Bronzeville only lasted a few years, and the impact that still echoes today blows my mind in so many ways — it embodies both an ephemeral and everlasting impact into the greater history of what Los Angeles is today.

JQ: As you worked on the project and did some research, what was the most surprising fact or aspect that you learned about the Bronzeville era?
EV: that in a very short time period, Bronzeville became official because it really did have a pulse! It amazes me how fast we humans can adapt under dramatic political times. My heart also felt heavy for all the residents that were affected before, during, and after the Bronzeville era. 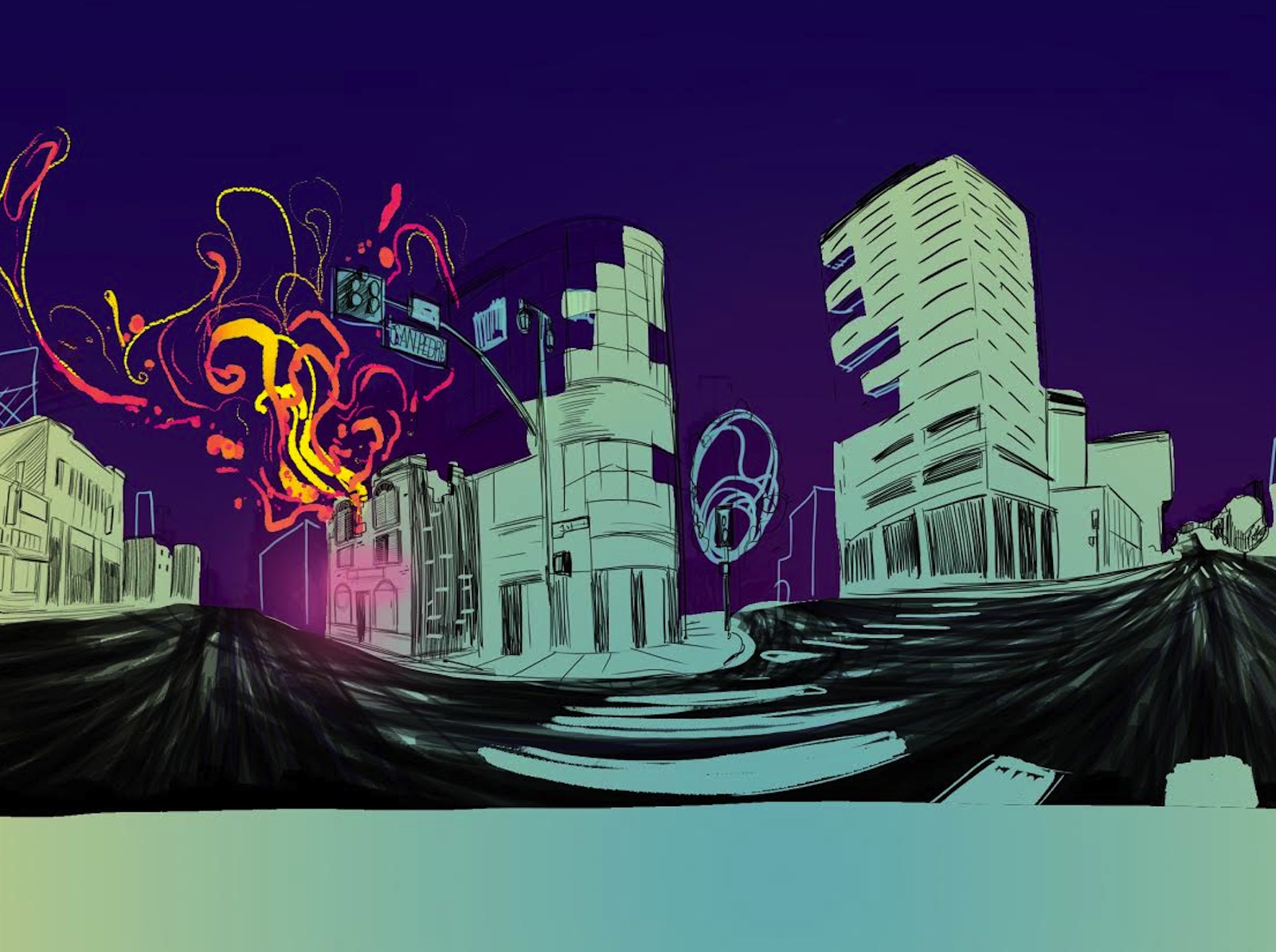 Javier Barboza of Kaleidoscope Studio, is an award-winning filmmaker, Creative Director, Animator, Educator, and Artist. He joins us as Co-director and Co-producer of Bronze, Brass, Jazz, a 3-minute 360 VR animation inspired by fabled stories about jazz great Charlie Parker and his memorable stay at the Civic Hotel (1st and San Pedro) and brief residency at the Finale Club (230 1/2 East First Street).

JQ: Why do you think your medium (animation) and this platform is important in highlighting such history?
JB: In today’s world it’s not about 15 minutes of fame it’s now about 15 seconds of fame. Animation can be thought of as a medium for children with short attention spans, but with VR the experience can be more immersive and engaging. It’s a medium that people feel nostalgic about and is still evolving. It’s important to push stories in new ways with new innovations. It’s also valuable to talk about race and gender.

JQ: What makes “Bronzeville, Little Tokyo” relevant to our current times?
JB: Beyond relevant. It’s exactly what is happening now. 75 years later we are still experiencing the same thing. Different kinds of war, executive orders, history repeating itself. How people are engaging in it now is different. Documentaries now have wonderment and amazement. There are new forms for people to have fun and learn about the past. 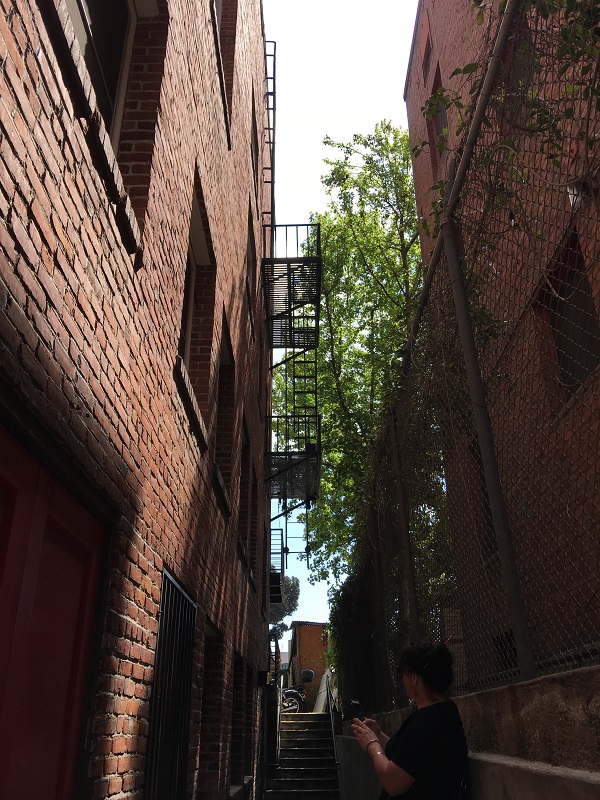 Jennifer Gutierrez Morgan, a multidisciplinary artist, often utilizing but not limited to Photography, Printmaking, Design, and Site-Specific Installations, creates Altar for Bronzeville & Little Tokyo at Union Center for the Arts on Sunday, April 30th as part of Sunday at the Old Union Church.

JQ: Why do you think your medium and this platform is important in highlighting such history?
JGM: Through creating a non-traditional altar in honoring this specific history, a greater awareness and sensitivity has arisen in respect to the duality of Bronzeville, Little Tokyo. I connect each form of expression offered in the programming, to the different ways we learn.

In taking apart the history of Bronzeville, Little Tokyo, it only seems natural to utilize multiple platforms in the effort to inclusively represent such a diverse era. While this narrative unravels with various limbs, we are presented with rich, extensive and even complex content surrounding specific communities and cultures. By providing the audience with an opportunity to interact with memory and physical space through the engagement of one’s own senses, it can become a very personal and integrative experience. An experience that is decisive and holistic, in ideally giving the history a well-rounded voice.

(Pictured: Jennifer Gutierrez Morgan on site at Union Center for the Arts). 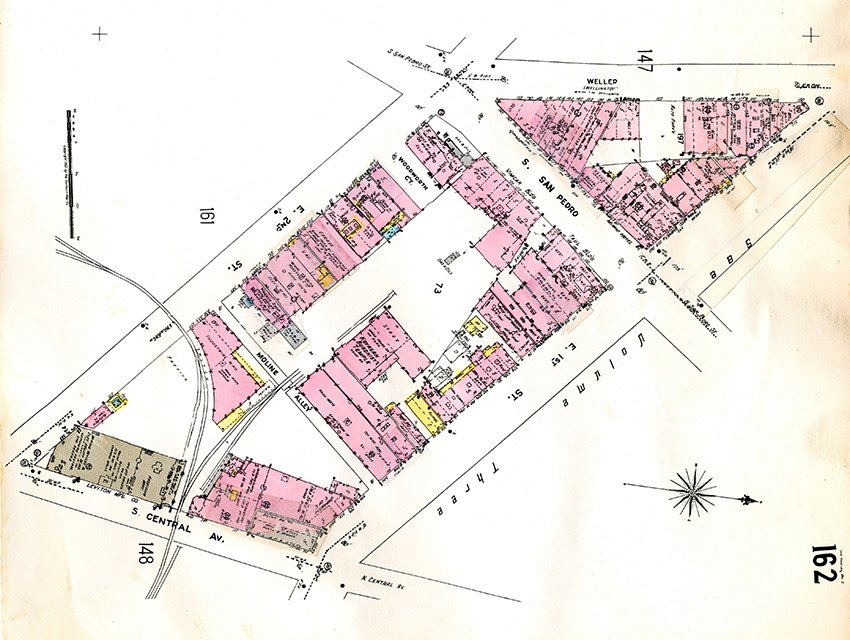 Francis Cullado, Executive Director of Visual Communications, is also Executive Producer of Bronzeville, Little Tokyo. He joins FfF for a second year of collaboration and is responsible for helping to jump-start FfF Interactive* in Little Tokyo through the Los Angeles Asian Pacific Film Festival.

FfF: What makes “Bronzeville, Little Tokyo” relevant to our current times?
FC: With our neighborhoods in constant transition, it’s good to remember the history of places. I’ve always felt that if residence and stakeholders of a place know it’s history, they would able to temporally locate themselves in this space and be more invested in the neighborhood.

FfF: What would be the most important thing you would want the audience to take away from experiencing “Bronzeville, Little Tokyo?”
FC: That Little Tokyo has a rich history, that’s not monolithically about Japanese and Japanese Americans. It was an intersection of people of color within Los Angeles.

FfF: Why do you this platform is important in highlighting such history?
FC: I think it’s a great medium, not just to reach new, younger audiences, but everyone through an engaging, immersive platform.

These are just a few voices from the multitude of hearts, brains, and sheer talent that came together for this project. There are no words to describe the lessons, gifts, and magic that comes from indie-doc-art/site-specific installations/collaborative projects like this. All I know is that there has been something bigger than us present, guiding us through the process and showing us the light that is this particular story to tell. We are honored to be remembering all the souls that lived on these streets and filled these blocks with their spirit. We hope this site-activation of the only historically preserved block left in Little Tokyo brings us all a little bit closer and inspires more meaningful collaborations to come.

Bronzeville, Little Tokyo is part of #MyFSN, a Little Tokyo community movement to reverse a history of being pushed out of our historic neighborhood essential to the sustainable future of Little Tokyo.