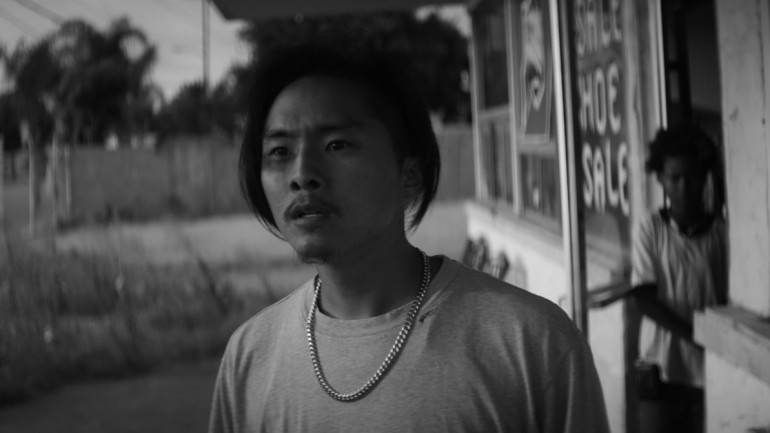 We are excited to present the winner of our Narrative Competition in our Encore weekend, GOOK, directed by Justin Chon.

Eli (Justin Chon) is a man caught in a bind. The proprietor of a struggling shoe store in sleepy Paramount (a Southeast Los Angeles suburb somewhere west of the 605 Freeway but just east of civilization), he is under pressure to make an overdue mortgage payment by selling a new shipment of overpriced basketball shoes of dubious origin. His layabout younger brother Daniel (David So) is more interested in macking the female customers and stoking his own aspirations of being a “gangsta” rapper than selling shoes to a steady stream of finicky customers. Across the street, liquor store owner Mr. Kim (Sang Chon) fights a losing battle with the odd shoplifters while maintaining a prickly relationship, charitably speaking. Complicating Eli’s life further is Kamila (Simone Baker), a streetwise tweener who regularly ditches school to hang out with Eli and Daniel. Stressed out, harried, and worried about maintaining a business that he inherited and barely tolerates, Eli presses on, inured to the calamity that will soon envelop the family business.

GOOK, the electrifying sophomore feature effort by multi-threat filmmaking talent Justin Chon (MAN UP!, Festival 2015), frames its slow-burning drama against events in a courtroom in faraway Simi Valley, where a predominantly white jury are deciding the fates of four officers accused of bludgeoning African American motorist Rodney King. Just like many Angelenos, in Eli’s family shoe store scant attention is being paid to the events playing out on local television. Instead, there is money to be made, a mortgage to be paid, an insolent brother who must be dealt with, and a sassy interloper who may be the closest thing to a confidante that Eli can ever have. But things don’t stay copasetic for long: Kamila’s uncle Keith (Curtiss Cook Jr.), already resentful of both Eli and Daniel, explodes when Kamila is discovered hanging out at the shoe store. Already being pulled towards South Central L.A. and the promise of “free stuff” in the maelstrom following the “not-guilty” verdicts in the King beating trial, Keith and his homies foment a new, lethal plan: head east, to Eli and Daniel’s store and teach the two “outsiders” a lesson for supposedly corrupting his young niece.

A period dramedy that owes as much to Italian neorealism as it does to the monochrome visual template of Charles Burnett’s LA Rebellion masterpiece KILLER OF SHEEP, this latest project finds director Chon in full auteur mode, striking a delicate balance between dark comedy and social-issue tragedy. That it all works so seamlessly is a testament to Chon’s assured writing; and to the equally-assured performances of his actors, chief among them comedian David So as Daniel, and Simone Baker as Kamila. GOOK, an ultra-low budget effort, is a million-dollar winner, and confirms Chon’s estimable filmmaking gifts. Never mind Spike Lee…Justin Chon has arrived!

Justin Chon was born in Orange County, California, and has worked as an actor for over 15 years. As a writer/director, his first feature film, Man Up, was distributed by Lakeshore Entertainment. He loves long walks on the beach and reading novels by candlelight.