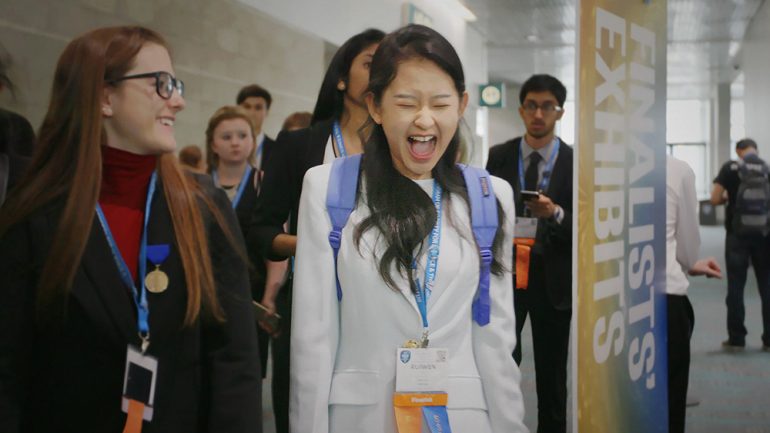 Winner of Sundance’s first ever “Festival Favorite Award” and SXSW’s “Audience Award,” the film follows nine high school students from disparate corners of the globe as they navigate rivalries, setbacks, and hormones on their quest to win the International Science and Engineering Fair in Los Angeles. Only one can be named “Best in Fair.”

Directors Cristina Costantini and Darren Foster take us on an inside look at the competitive world of the Intel-sponsored International Science and Engineering Fair (ISEF), where the best and brightest young STEM minds from all over the world gather and battle it out. Following a diverse group of nine high school students from their various hometowns as they ready for the big competition, SCIENCE FAIR offers us an optimistic examination of our global youth’s collective intelligence, ingenuity, and investments in using science and tech to help solve many of our world’s ongoing problems from environmental pollution to cancer.

From Louisville, KY, Anjali’s confident determination to impress with her arsenic-detection device goes head to head with the dynamic trio of Ryan, Harsha, and Abraham’s work on next-gen cardiac arrest research while Dr. McCalla’s Jericho, NY group of science kids do intense prep under their research mom. Meanwhile Kashfia, a young Muslim woman from Brookings, South Dakota, studies brain function and the adverse risky behavior of teens and struggles to find a faculty sponsor in her sports-oriented school. Myllena and Gabriel, two teens from an impoverished, small town in Brazil, hope their research will lead to a potential cure for the Zika virus. Ivo, a German aeronautical wunderkind, builds a flying wing with better fuel-efficiency and stability while Robbie, an aimless, whip smart computer programming West Virginia teen, wants his win to open doors to the best colleges.

Imagine the ISEF as the STEM disciplines’ Olympic Games and its participants as an international coalition coming together from disparate backgrounds in hopes of winning medals, gaining notoriety, and making one’s reputation. To varying degree, these kids aspire towards these goals but they also carry the hopes and dreams of their families and communities with them. —Melanie Ramos, with additional contributions by Lindy Leong

Co-presented with Community Partners: OCA-GLA and Project by Project

Cristina Costantini directed and produced SCIENCE FAIR, her first feature documentary. She won an Alfred I. duPont–Columbia University Award and has been nominated for two Emmys. Before attending Yale University, Cristina was a science fair nerd. As a freshman in high school, she placed fourth in her category at the international science fair—it’s all been downhill from there.